They call it the Indio Date Festival…but it’s really a fair…a good sized fair. The attendance over 10 days is about 250,000.

It’s a tad different then your run of the mill fair. Oh, it has the same frantic midway with the ‘barkers’ calling out “Knock down the bottles and win your girl a prize!” And the screams from the direction of rides that contort the human body into positions they were never meant to be! And ambling teens with their hands in the back pockets of each others jeans. And cotton candy and dozens of stands of food…each assaulting your senses and causing you to hesitate a second while you decide if you can pass by without a taste.

But THIS fair is in the desert. The queen and her court are dressed in harem costumes. Here you can watch exotic belly dancers or ride a camel. The petting zoo along with the usual accompaniment of critters has a baby giraffe and little zebra’s to pet. And majestic palm trees wave overhead. 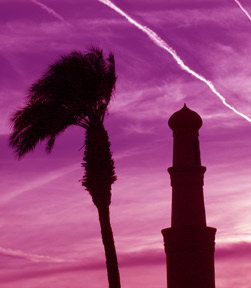 We walked around and played around….but we were just teasing ourselves. Because what we really wanted to do was go to the building where the woodcarving show was being held. Rick had entered the contest! I started at the back and admired all the carvings…slowly walking around (while casting furtive glances…trying to spot ‘our’ carvings). And then I spotted it… the ‘golfer’…in his own glass case…looking mighty fancy. And there was the blue ribbon AND the plaque ‘BEST OF NOVICE CLASS’! Rick was cool about that and the other first prize and second prize and third prize…but I wanted to run around and drag people over and say “That’s what my husband carved…isn’t he wonderful?” 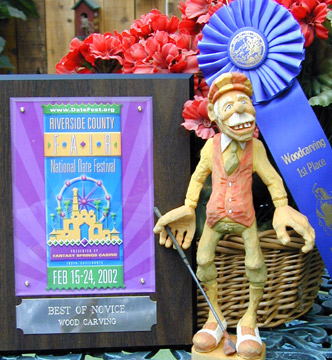