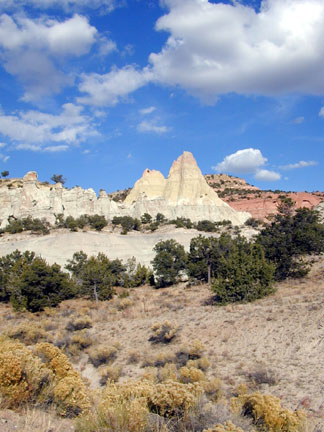 The ‘Red Rock’ country is so beautiful it stopped us in our tracks. We just pulled into the ‘Church Rock’ State Park, near Gallop NM, instead of hurrying on our way. And when we arrived in the park we got a grand surprise. The Zuni Indian Tribe was having a craft and performance get together here at the park.

They make the most fascinating jewelry…beautiful things! I bought a  necklace and also a ‘fetish’ of a cat. The Indian lady told me that in the Zuni culture…the sun god…”saw that humans couldn’t take care of themselves and so he turned animals into stone and these ‘fetishes’ watched over them until they learned to live in the world.” She said “If you find a stone that resembles an animal now… my people believe that it is one of the ‘original’ fetishes. It would still protect and be very valuable to them spiritually.”

This young man was sitting next to me during the various musical presentations. He’s probably 8 or 9 years old…sweet and smart. He took it on himself to explain ‘everything’ to me.

He proudly told me he could start a fire without a match. I asked him if that was because he was an Indian? And he informed me “Well…NO, it’s because I’m a BOY SCOUT!”

The Zuni Indian tribe firefighters are well known in California…They’re often asked to fight the fires in our ‘tinder dry’ state. 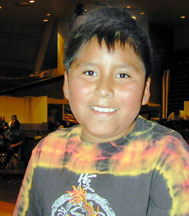